We send fishing information from Susaki, Japan, to anglers all over the world.

This time, we introduce rules and other information about Akame fishing in Sasaki.

Akame (Lates Japonicus) is also known as Japanese Barramundi and related to Nile Perch in Africa and Barramundi in Australia.

When Akame reflects light on its eyes, it turned into "Redish" color. That is what this name comes from.

This bay is calm in all seasons because the moutanins on the lands and peninsula shatter the winds almost all directions.

Currently, this bay is being noticed by the anglers slowly as one of major spots for Akame.

Akame is the fish originally inhabiting mainly southern Shikoku such as Kochi Prefecture and spreading around Miyazaki Prefecture, and was used to be categoraized as endangered species.

However, thanks to administrative and civilians efforts, population of Akame has increased enough to let anglers to catch them.

In terms of its population and legal aspect, Kochi is probably the best Prefecture to catch it.

However, recently, Uranouchi Bay is confirmed to also have a number of Akame and anglers after Akame have been increasing in these years.

Then, as the fishing center providing fishsing information in Susaki where Uranouchi Bay belongs to, we decided to put out important information about how Kochi Prefecture treats Akame.

As mentioned above, Akame was used to be an endangered species but now Kochi changed its status from endangered to "Remarkable Species".

Below is a front and back page of a Akame brochure published officially from Prefecture. 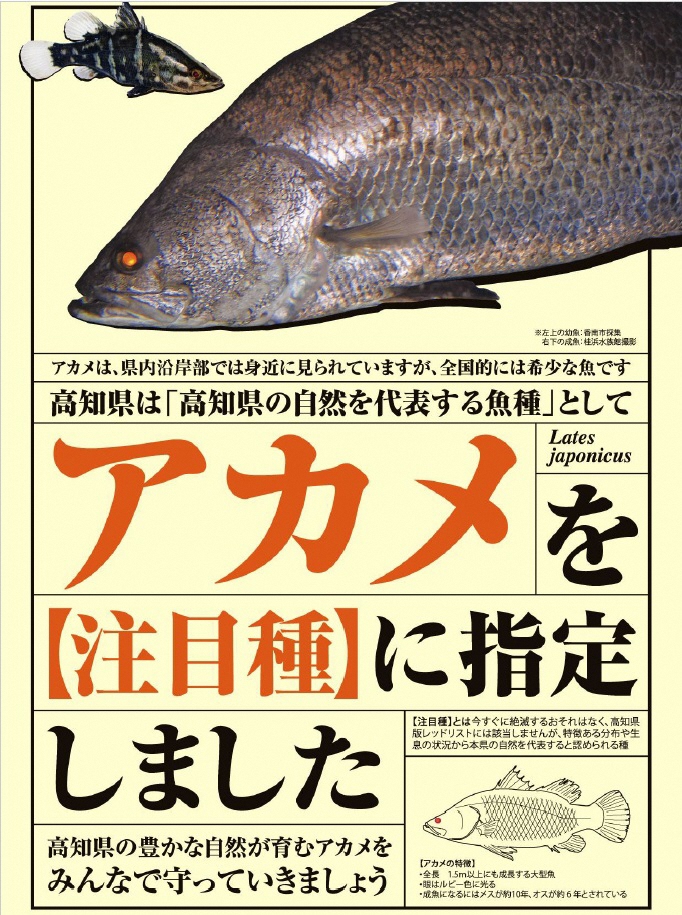 On the top left, there is a juvenile fish. When it's at juvenile time, white and black stripes are still clear on body and they disappear when got bigger.

As you can see, an eye is shinning red. This photo is taken in Katsurahama Aquarium.

In this aquarium, there is a huge water tank which contains about 15 Akame.

What it says above is:

"Akame can be seen closely at the shore of Kochi coastline, but is quite rare in the other prefectures. "

"Akame is registered as 'Remarkable Species' in Kochi Prefecture. "

" 'Remarkable Species' means that that species is not currently facing extinction and not in the 'Red List in Kochi' either, but is considered as a representitive species of nature in Kochi due to its habitat and characteristics."

"Akame's characteristics: it can grow over 1.5m (5ft), Eyes shine in ruby color, Female needs about 10 years to get matured and 6 years for male."

Below is a back page of Akame brochure.

If you plan to come to Kochi to catch Akame, please follow these 5 rules.

●Do not kill Akame meaninglessly.

●Do not catch Akame for sale.

●Do not transport Akame to other areas.

●Do not bring Akame caught in other areas. 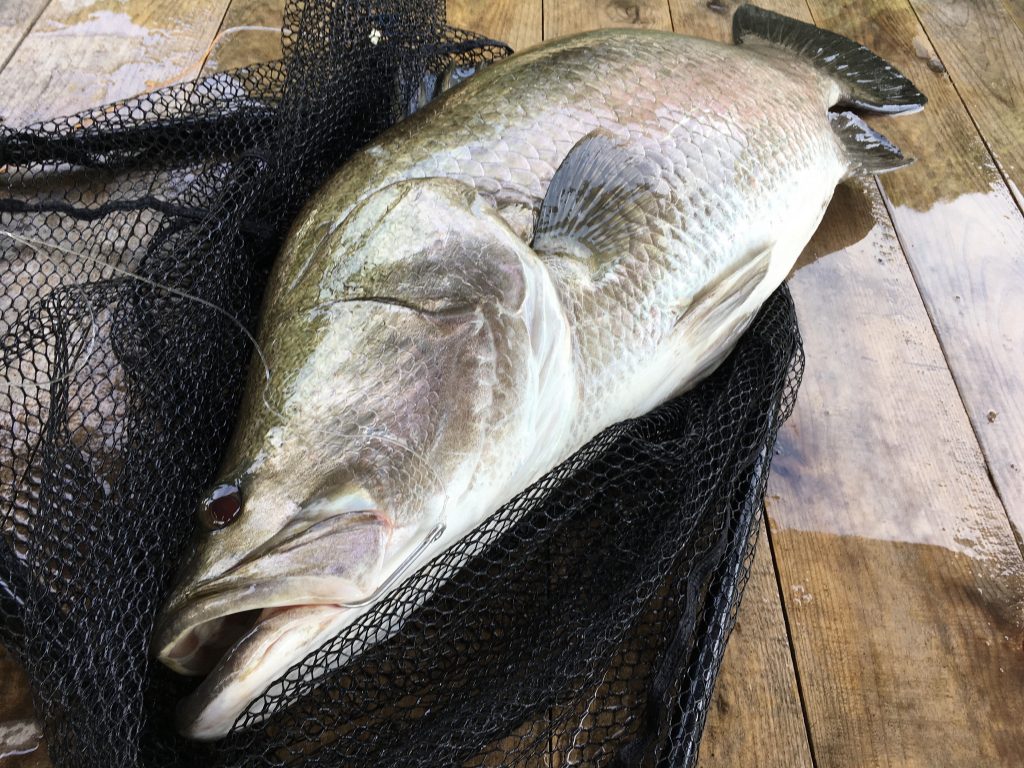 Here is the Kochi Prefecture's website describing about Akame.

About registering Akame as a Remarkable Species

"Remarkable Species" is explained as following、

" 'Remarkable Species' is a technical term for species that is not facing extinction yet and neither registered in Kochi's 'Red List', but is recognized as a representitive species of Kochi Prefecture due to its unique characteristics and distribution. "

If you are interested in other remarkable species registered in Kochi, please refer below.

This time, Susaki Tourism Fishing Center is introducing how Akame is caught and released in Kochi Prefecture as a part of fishing promotions for whole Kochi

because Akame fishing is prohibited in Miyazaki Prefecture and Kochi is the main area where most of Akame anglers gather.

These are the administrative actions for Akame by Kochi Prefecture.

If you are planning to visit Uranouchi Bay for Akame, please follow 5 rules written above for sustaining Akame population and passing this great fishing to the future.

Alrighty, here this is informaton of fishing rafts where Akame hides below in Uranouchi Bay.

Currently, there are 9 fishing rafts available. All of them are designed for "Powder Ball Fishing" mainly for Black Seabream.

Black Seabream is a quite popular target here. Master anglers sometimes catch about 50 of them or even 100 of them at the best season.

Other than Black Seabream, there are various targets available from these fishing rafts such as Mullet, Stumpnose, Seabass, Blackfish, Mackerel and so on.

Akame feeds on these fishes. For Akame, fishing raft is like a buffet restaurant. Since anglers drop tons of bait from above to gather Akame's foods,

Akame doesn't have to either search or chase bait fishes, but just stay there. Especially, bait fish hooked by anglers cannot swim away, just struggling in very narrow zone.

It is quite easy for Akame to feed on those bait fishes compared to bait fishes unhooked and swimming freely that Akame has to use its enery to chase to eat.

All fishing rafts in Uranouchi Bay belong to Raft Association, therefore fee is all set in same. Fee is all for a whole day from 6:00~ 16:00 (time schedule varies in seasons).

Below is the list of all fishing rafts in Uranouchi Bay. Please make a reservation at least by one day before.

Also, please make sure the lounching spot by calling because all fishing raft services are managed by different individuals.

According to them, Akame starts appearing around fishing rafts from the end of May to the beginning November.

Have a great and wonderful fishing in Uranouchi Bay!