How have you been?

Yeah, summer has come, not rainy  season finishes yet though.

There are several kinds in Lates genus in the world and Lates Japonicus ( Japanese Barramundi, Akama, literally "Red Eye") is one thriving originally in Japan.

This barramundi (hereafter, Barra) is quite popular among anglers since its habitat is limited only around southern western Japan and its numbers are not many.

Kochi Prefecture is probably the best place to challenge that fish and especially Urado bay is where Japanese record (131cm, 39kg) was confirmed and most accessible from the airport.

Therefore, Urado Bay has been known as best but sometimes only spot for catching Barra for long time.

HOWEVER, here in Susaki, there is a bay called Uranouchi bay surrounded by the peninsula stretching for 18.8km.

While Urado bay's Barra fishing is done mainly at night, daytime fishing is main in Uranouchi Bay, which is much more exciting to see the fight.

So, I went to Uranochi Bay to research with colleages.

I and colleages were thinkning that Barra is rare and very cautious fish, so that would be great if we could catch one by the end of the day, but

after 30 minutes from the beginning, one of us suddenly caught this by letting 17cm smallscale blackfish swim with a big hook. 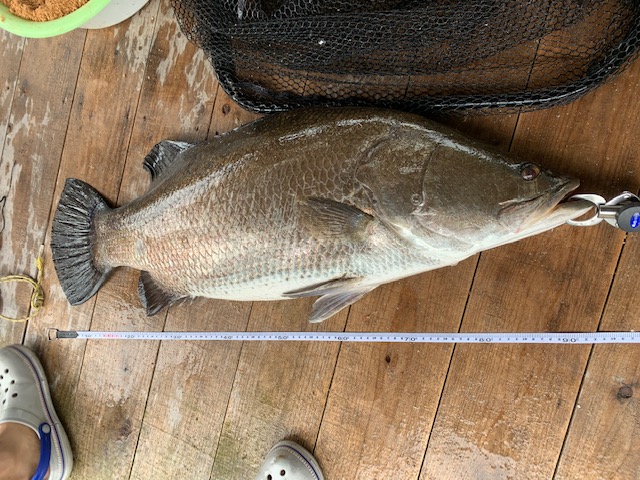 That was really amazing experience since I have never thought Barra is such easy to catch.

Plus, great things were fishing raft is covered with roofs, gas burner equipped with drinking water, clean rest place without shoes, toilet, fishing gears such as net, fish stock net, containers, buckets  and so on.... So, there is no worry about sun burn and rain. Just bring your fishing rod, reel, rigs, and bait. You can even enjoy BBQ on the raft if owner says OK.

Below is the list of raft floating at Uranouchi Bay. Call them by the day before and enjoy!