Hello, world anglers!  How have you been?

Hope at least few people out of Japan are reading this website. Otherwise, there is no point for me to update fishing information about Susaki in English.

So, I really hope so.

They mainly aimed for Grouper and Tilefish.

As other targets, Yellowback seabream is majority.

It's quite funny that anglers on a same boat can't catch same fish.

Some people catch only Yellowback Seabream.

Some people catch grouper and tilefish while catching yellowback seabream. 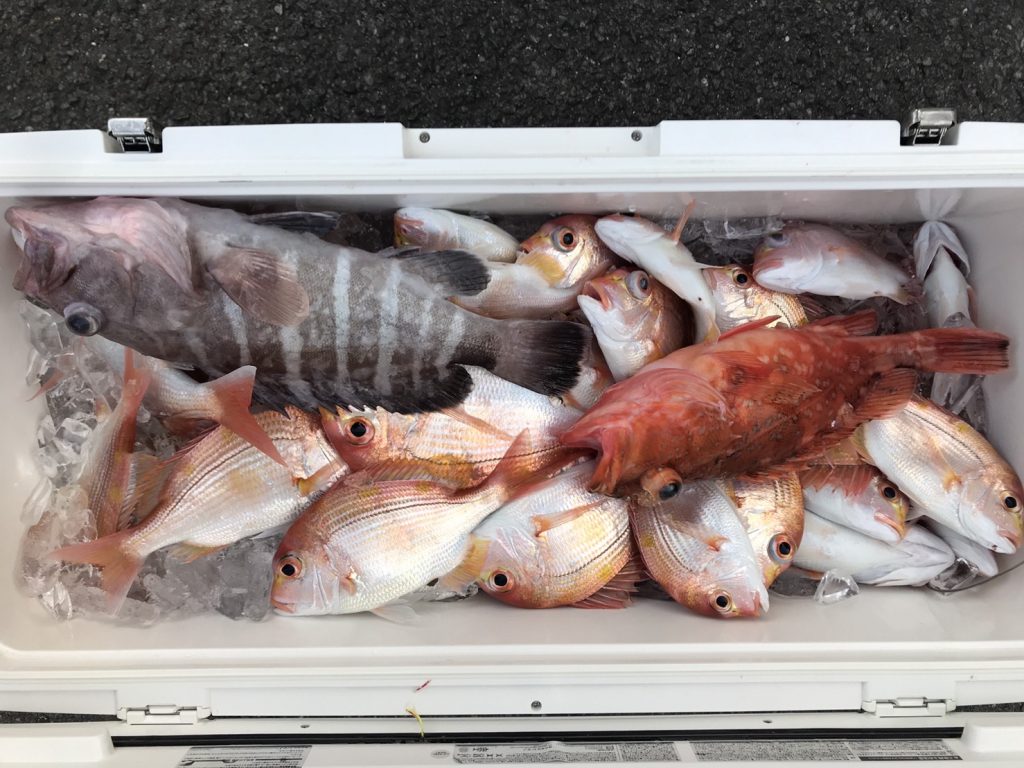 Some of Yellobwack seabream are less than 20cm (8in) but almost not able to release due to the dramatical change of water pressure while retrieving from the bottom of the  ocean to the surface.

Their gal bladder comes out from mouth and eyes pop out. Even if anglers release, those breams will sink and erode at the bottom of ocean.

So, taking them home to eat is best way. 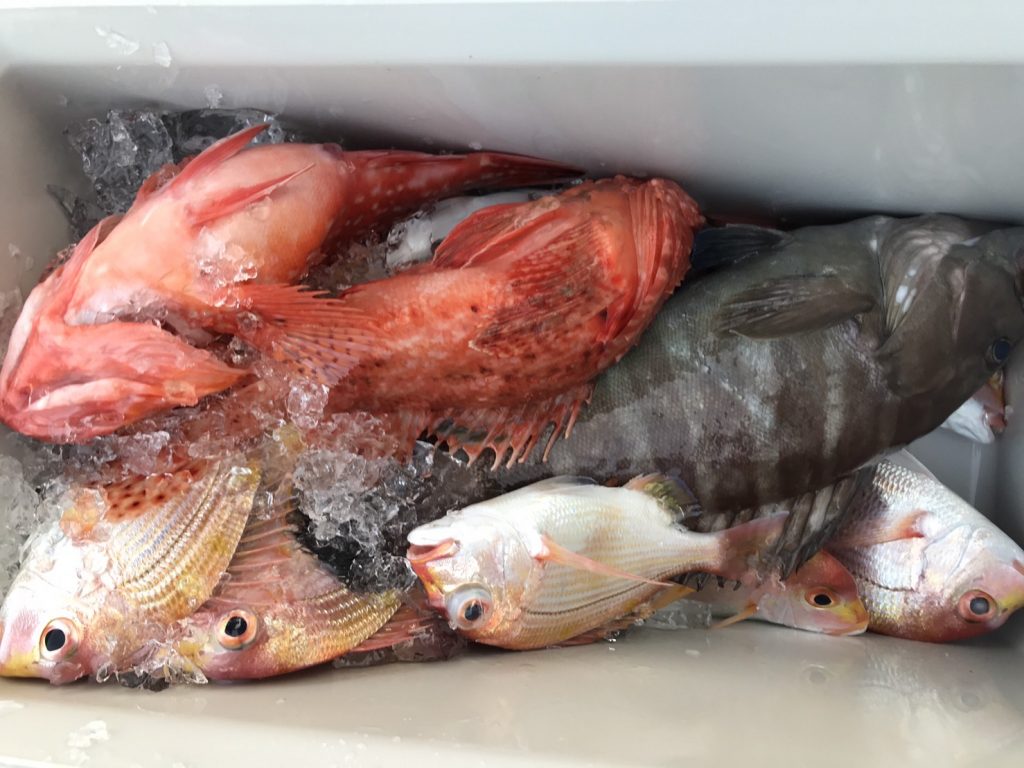 Here is second cold box. Same as first box, there's a big six banded grouper. Also, Hairy stingfish has been caught. This fish has poison on dorsal fin, but taste is good.

If you caught this in future, it's highly recommended to cut dorsal fins first if you take this home.

Ok, let's see the third one. 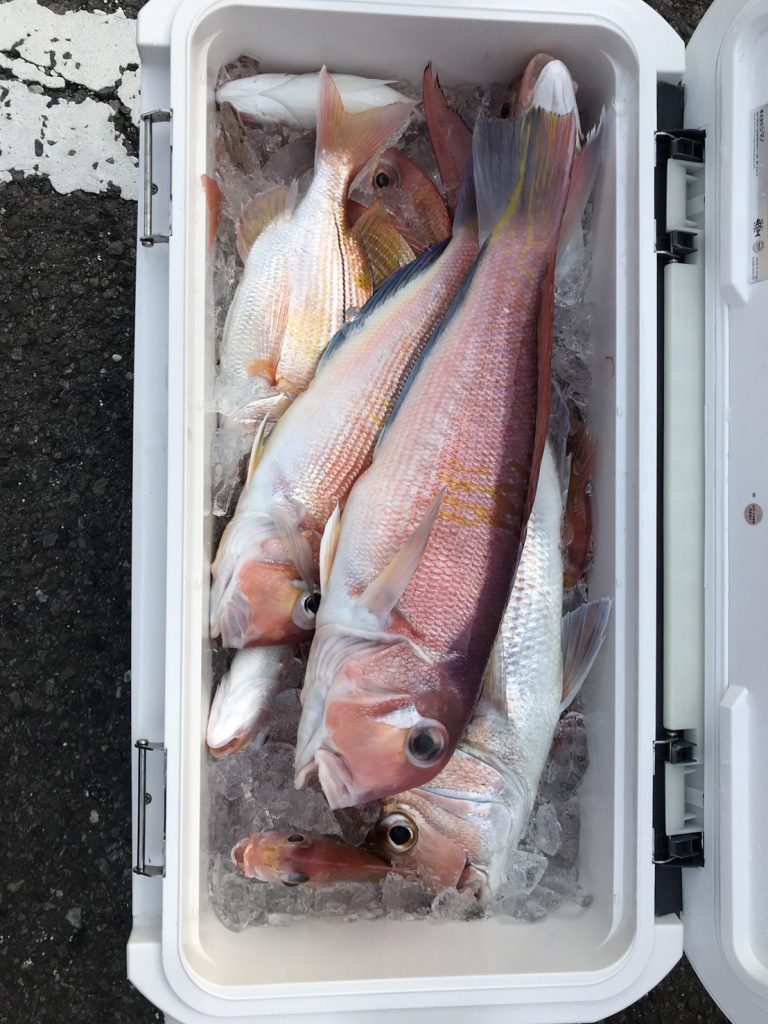 Huge Tilefish and even bigger Red Snapper below.

In these days, I just relized that the best way to eat Tilefish is not Sashimi (Raw) but after made sashimi, sandwich them between kelp and leave it for a night.

This technique is called "Kobujime" that means ""flavored with kelps". Tilefish meat is dehydrated relatively by kelp but kelp flavor soak into fish meat instead.

Fish meat gets chunk and more delicious. If you caught fresh fish, this method is highly recommended. 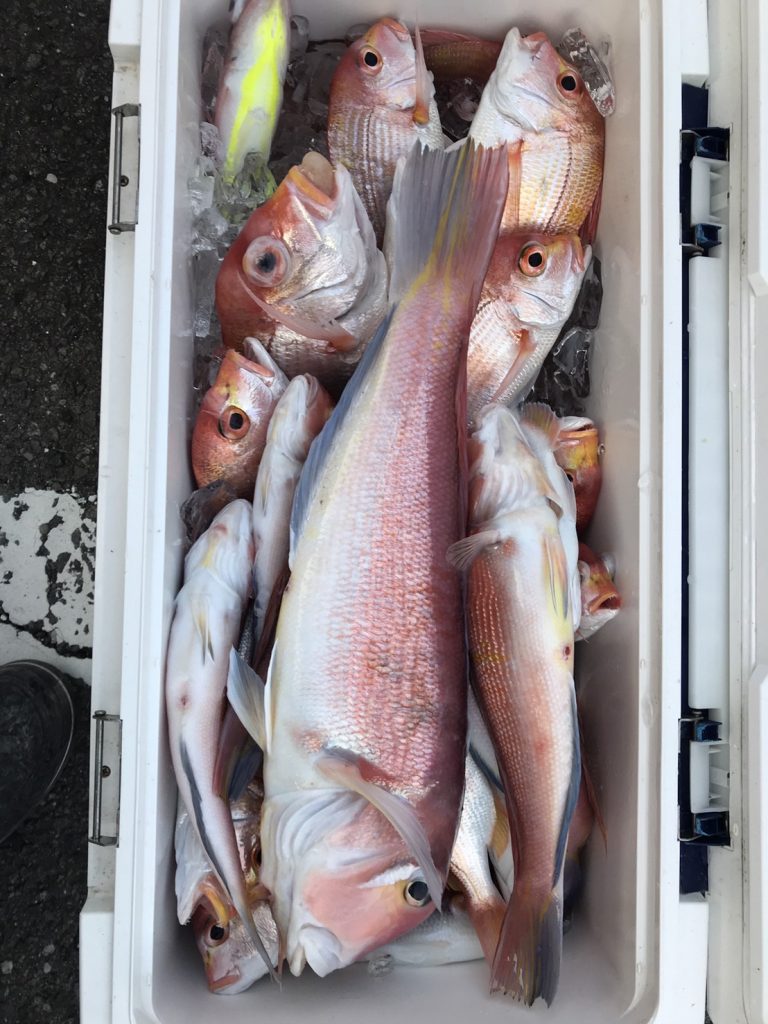 Giant Tilefish!! And, there  is a golden threadfin seabream on top left.

There is a big yellowfin seabream is showing its head thrusting from the back of big tilefish.

Fishing style is also called "Tairaba" which is effective for Red Snappers and other kinds of snappers.

As well as lure fishing service, we also provide the service that carries anglers to offshore inlets for Smallscale Blackfish and Striped Beakfish. Both fishes become fatter and fatter in winter and more tastier.

It is highly recommend to aim those fishes in winter . Detail is here.